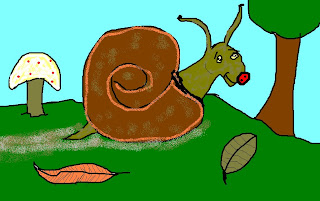 Like a salty slip'n'slide these guys slid on their mucus producing bellies to victory! WEEEEEEEEEEEEE! But they were really slow, so it was probably more like WWWWWWW...(ten boring days later)....e.
Due to their glistening trails and balls they were easily tracked by le hunters. But the snail had a trick up it's moist and dimpled sleeve - an easily crushable shell. Stupid snails. You were smarter than a Slug but stupider than a Stick Insect. Goodbye.
Posted by NORRI'S ARK at 9:10 PM No comments: The Whale Shark was the most confused thing in the ocean. Sexually, mentally and species-ly. Actually, the Jelly- fish was a weirdo too. Are you a fish? are you some jelly? no. I'm neither. What the hell? Don't touch me. The Whale Sharks interests included: swimming, eating and diving. Imagine a Dog Horse. Or a Salamander Hawk. Or a Hat Sea Cucumber. There should be more half and half things.
Posted by NORRI'S ARK at 10:06 PM 1 comment: 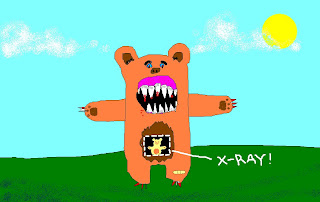 The terminator of the woods. As scientificly-provable-fossil-rock-strata history tells us - A Bear was once sent back in time to destroy John Conner. John Conner had to be killed as he was the future leader of the humans against an evil bear uprising.In part two a bear is taught to be good then sent back to protect John Conner. You wouldn't believe it but it was the same bear!!
Posted by NORRI'S ARK at 9:44 PM No comments: 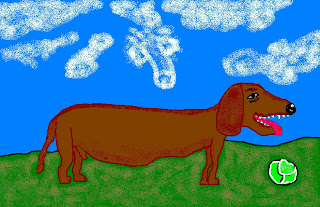 These guys were awesome. Like midgets, I was not sure if you were allowed to laugh at them, but you should have seen them run. Due to their shape and meatiness they were named Sausage Dogs, but my mate Nick called them Dooters. "Why?", I asked. "Look at them, do da doot, doot doot" he replied. So, doot doot to you Mr Sausage dog, doot doot indeed.
Posted by NORRI'S ARK at 2:51 AM 1 comment: 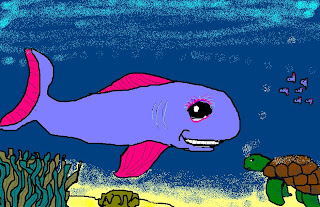 I figure that since Noah didn't have fish on his Ark, that this Ark will actually be more complete than his. Kazaa.
The King George Whiting, was named after King George. Popular amongst sea creatures, the King George was known for being very social, often seen swimming with turtles. The King George whiting is grateful for its place as the first fish included at Norri's Ark.. You're welcome King George!
Posted by NORRI'S ARK at 2:11 AM No comments: 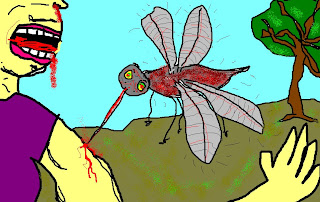 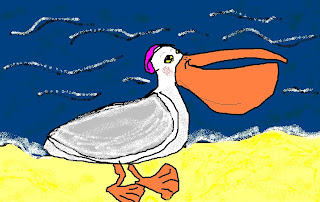 Dear Ark, this was the graceful pelican. Humble in demeanor. Big in Beak. The beak was used to carry younglings well into puberty. The pelican was a flight bird and was known to fly over 70 kilometres in one go. Thought to have evolved from greedy seagulls, the Pelican was also the hero of the movie "Storm Boy", you should see it, I think it dies in the end, or it could have been the boy, either way, five stars. Like Ants, the Pelican can carry ten times the weight of a human. They lived near and above coastal areas and as the old sea shanty goes - "if a Pelican can, then anyone can".
Posted by NORRI'S ARK at 1:06 AM No comments: